From the official press-release

Hachette Australia is thrilled to announce the acquisition of the debut YA graphic novel by Melbourne-based author and illustrator Briar Rolfe. The deal was brokered between Jeanmarie Morosin, Head of Children’s Publishing, Hachette Australia, and Danielle Binks at Jacinta Di Mase Management. Get Your Story Straight, which is Rolfe’s debut, will publish in 2024.

Get Your Story Straight follows Henry, a 19-year-old trans man who is out to everyone except his conservative Christian parents. When Henry realises his best shot at accessing top surgery is by faking an engagement to his friend Cooper, he learns it isn’t easy to plan a wedding, even a fake one. His mum wants to control everything, his dad is convinced that nonbinary Cooper is a closeted gay man, and Henry might be developing feelings for his fake fiancé—and the Australian Government has just announced the 2017 Marriage Equality plebiscite. Is the cost of staying closeted worth the pain of coming out? What does a fake wedding mean if you’re not allowed to have a real one? And is a person really torn to pieces by a crocodile in North Queensland every three months?

Heartiest of congratulations to Briar Rolfe, Hachette Australia Books, and agent Danielle Binks on the ANZ-sale of Get Your Story Straight, an important (and heartwarming) new LoveOzYA AusLit, and especially for expanding Graphic Novels as a form in this country!

And here’s what Briar had to say, about working with JDM; “It’s been such a blast working with Danielle on Get Your Story Straight! Danielle’s industry knowledge, enthusiasm, and skill as a storyteller have been essential to me as someone working on their debut graphic novel. Jacinta and Danielle are passionate advocates for their creators—I’m confident my career is in great hands!” 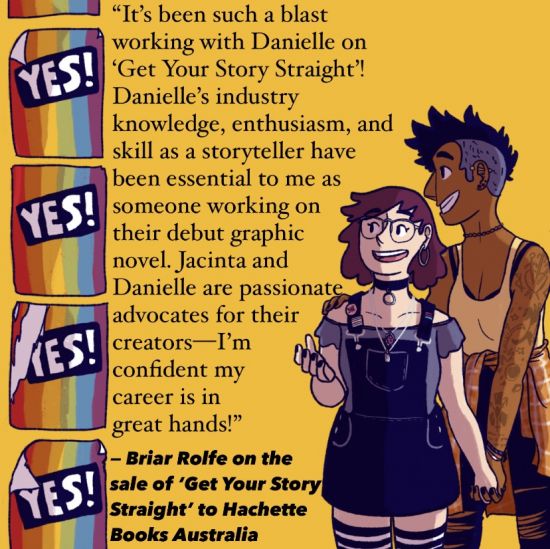