By David Brewster and Sohila Zanjani

By Sohila Zanjani with David Brewster

Three generations of Iranian women and their search for freedom. From Tehran to Melbourne, a powerful memoir of survival.

Scattered Pearls opens in pre-revolutionary Iran, where Sohila Zanjani grew up under the threat of violence, intimidation and control at the hands of her father. Resolving never to tread in the footsteps of her mother and her grandmother, both survivors of domestic abuse, Sohila tried to find a new life for herself on the other side of the world. But to her horror she discovered that living with her father had been gentle in comparison to the reality of her new married life.

Spanning more than a hundred years, Scattered Pearls tells the true stories of Sohila, her mother and her grandmother, and the injustice and abuse meted out by the men in their lives. It is a story of cultural misogyny in both Iran and Australia, and of an ongoing search for a loving, equal relationship.

Along the way the book provides a glimpse into the lives of ‘ordinary’ Iranians and the power of the Persian culture. It’s also a confronting insight into what can go on behind closed doors – even in an ‘advanced’ society.

But at its heart, Scattered Pearls is a story of resilience and personal growth, and of allowing the future to blossom in spite of the damage of the past. It is one of optimism, courage, and love and hope.

This is the story of three women,but it carries with it the stories of an entire culture. 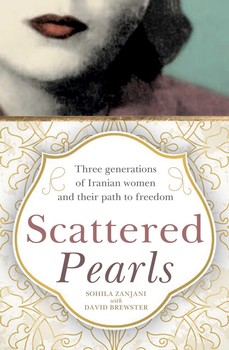