“As Jane Austen wrote before the 2013 AFL season, ‘It is a truth universally acknowledged among football pundits that Hawthorn will win this year’s premiership.’”

This book tracks Hawthorn’s triumphant 2013 through the one-eyed perspective of Phillip Taylor, Hawks tragic. A hallucinatory account of all things Hawthorn, it celebrates the sartorial elegance of the brown and gold vertical stripes, traces the numerological power of the number 23, and reveals how Hawthorn broke its Groundhog Day disorder against Geelong.

These days, there are more television hours of analysis and review of the AFL each week than there is actual game time. This book doesn’t dwell on the kicks, corkies, handballs or hard-ball gets. Rather, it traces Hawthorn’s dramatic and eventful season from the fans’ perspective, giving voice to the excitement, exasperation and – ultimately – exhilaration that all Hawks followers felt.

Reliving each match of Hawthorn’s victorious year, Phillip Taylor captures the fans’ experience of football, from the public bar to the members’ pocket at the MCG. It is the definitive record of Hawthorn’s 2013 premiership campaign, celebrating the AFL’s latest (brown and) golden era. 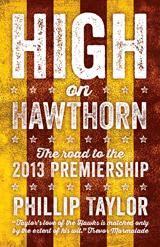