A glitzy whodunit set amongst the Gold Coast elite and a hilarious romance between Macey Pentecost, the privileged teenager with a social conscience who just happens to see ghosts, and the good-looking surf champion Finn.

Description
Macey was normally immune to cute, but this guy had it down. It was that killer-watt smile. He knew how to work it. Pity he was also dead.

Macey’s life has been turned upside down. Her mother has left, her father is absent and her two best friends are MIA. On top of that Macey is being visited by ghosts who need her help to ‘move on’. But as wild as all that sounds, she has it all under control until a cheeky, good-looking spirit called Nick turns up … in her bedroom!

Nick’s a spirit with spirit, who insists he’s not dead, he’s astral travelling and has a message for Macey: someone is out to get her. Macey’s biting wit has got her in trouble before, so she’s not surprised but when the threatening notes start turning up, she’s seriously shaken. Does someone want her dead?

It’s all pretty disturbing but she’s finding it hard to focus on who could mean her harm with the annoyingly handsome surf god Finn turning up at the most inopportune times and a father with a major surprise of his own.

Is it a case of bad timing? Or are these things somehow connected? And if they are, what on earth should she wear when she’s solving the mystery? 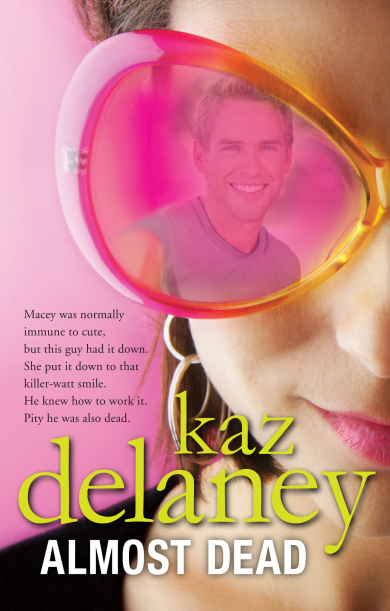